For The Ghenie Chapels project, Adrian Ghenie has created two new, site-specific paintings that address the theme of contemporary martyrs of the church. On one side of the main nave, he depicts the crucifixion of Christians that takes place to this day in the Middle East and, on the other side, the martyrdom of Blessed Pino Puglisi, who was murdered by the Mafia in 1993. These works of art were donated and permanently installed under the curation of Alessandra Borghese and thanks to the work of Father Giuseppe Bucaro, Director of the Cultural Heritage Department of the Archdiocese of Palermo. The creation of The Ghenie Chapels in Palermo originated from the desire and need for the contemporary collective imagination to confront the eternal. Ghenie’s artistic intervention makes the church a place of ecumenical and artistic pilgrimage. The Ghenie Chapels situates itself in Palermo as the Matisse Chapel (decorated by the artist Henri Matisse between 1949-51) does in Vence, France, or the Rothko Chapel (the non-denominational church founded by John and Dominique De Menil with 14 works by Mark Rothko) does in Houston.
A short film was made about the commission, creation and installation of Adrian Ghenie’s two works, and a book is in production.

This painting was inspired by the artist’s realisation that crucifixions are not merely events of the past but are a fate still suffered by persecuted religious minorities to this day. He depicts a contemporary version of the figure of Christ on the cross, inspired by reports of recent crucifixions of Christians in Syria. For Ghenie, this became a way to revise and modernise a classical theme, while also drawing on the iconography of crucifixions from art history, including those by Goya, Guido Reni, Tintoretto, Veronese and Titian. In his reinterpretation, the man is bound to the cross with rope, rather than nailed there like Jesus, and he is clothed in branded sportswear. The Catholic Church has recently canonised a group of Christian martyrs in Libya who were killed by Islamic extremists. It is not by chance that the figure of an armed terrorist can be seen going towards an orange element on the left, a reference to prisoners of Islamic State who were made to wear orange overalls before their execution. The background of the painting picks up on the greys found in the Chiesa della Madonna della Mazza, situating the work in both time and place. 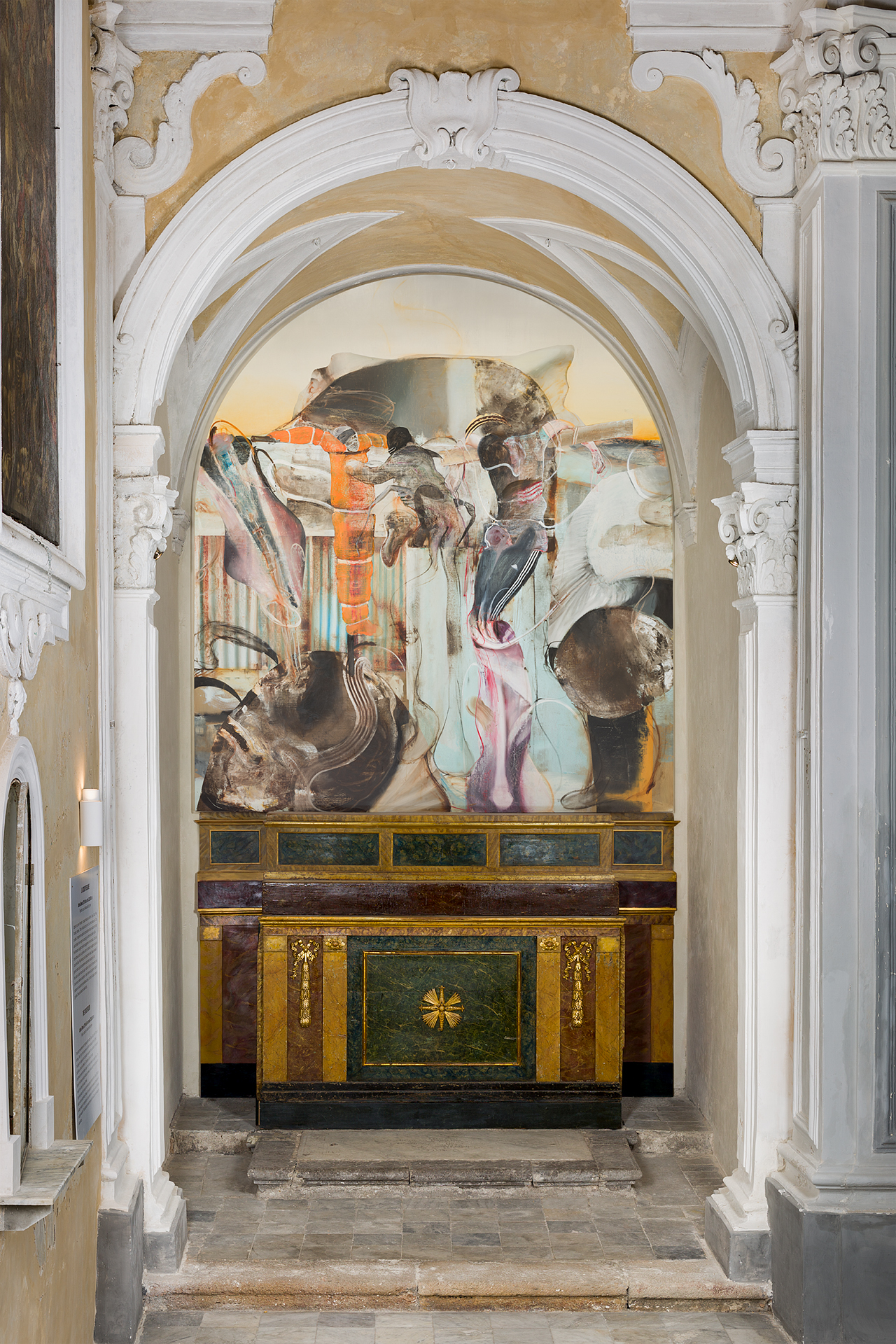 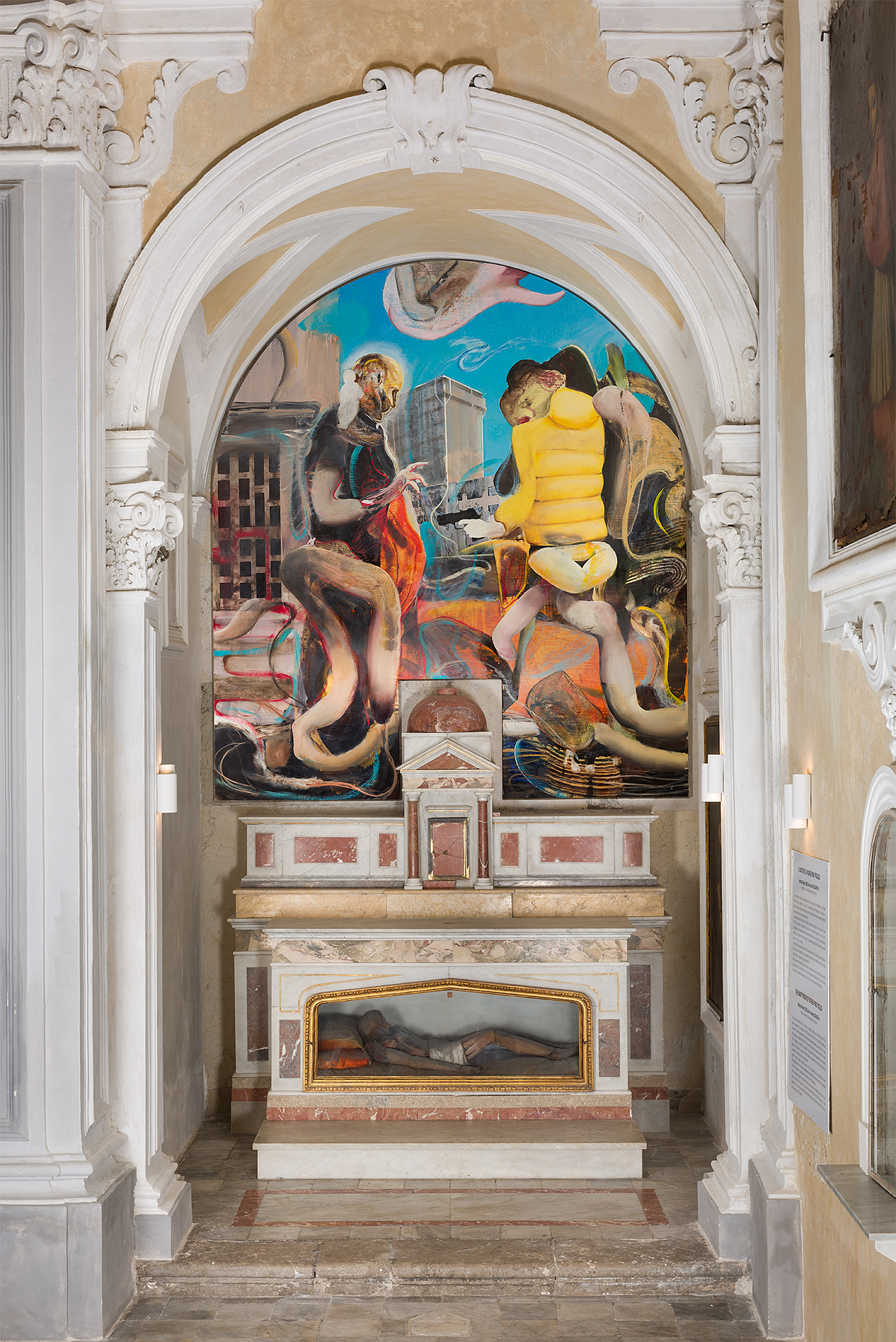 The martyrdom of Padre Pino Puglisi

The composition of this artwork is inspired by Michael Pacher’s famous medieval painting Saint Augustine and the Devil (c. 1483), preserved in the Alte Pinakothek in Munich. Ghenie depicts the historic encounter between Good and Evil in a way that is easily legible to the public. The Church has always honoured people who have given their own lives for their faith, such as Padre Pino Puglisi, recognised as a martyr for defending the rule of law in Palermo against the Mafia. With a gun in his hand, the assassin takes on the appearance of a contemporary devil, dressed in a yellow bomber jacket – the colour of Lucifer’s envy of God and goodness. Padre Puglisi carries the baby Jesus on his shoulders, like a modern-day Saint Christopher. With one hand he blesses his killer; even when confronted with violence, a true saint is incapable of hating his enemy. From the lower half of the devil figure, his innards emerge, taking the form of a snake that tries to wrap its coils around the saint. In the background are the buildings of Brancaccio and the door of the Sicilian priest’s house.

Built between 1603 and 1606, La Chiesa della Madonna della Mazza is situated in the pedestrianised area of Via Maqueda on the island of Sicily and for centuries provided a place of respite for the city‚Äôs poor. The church takes its name from the traditional iconography showing the Vergine del Soccorso holding a small club against the Devil, a powerful image symbolising divine omnipotence against Evil. A wooden statue depicting its namesake, the Madonna della Mazza, is in the niche above the altar in the main nave. There are numerous works of art within its walls, by artists including Battistello, Zoppo di Gangi, the school of Caravaggio and, now, Adrian Ghenie. 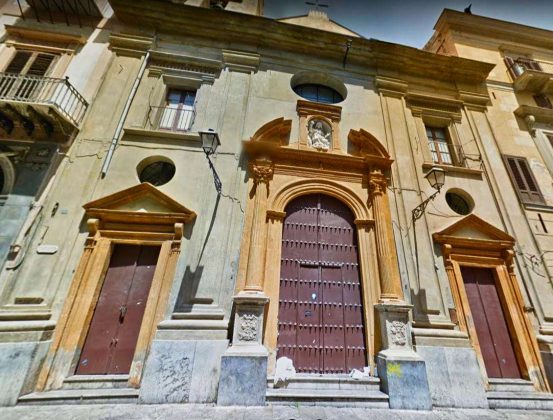